One-year after the pandemic first emerged, the U.S. is making some positive progress in battling the virus. Vaccination efforts are in full swing, with the U.S. administering nearly 2.5 million vaccine doses per day in the second half of March. Daily new confirmed cases are down from their early 2021 spike. The data is encouraging and signals the pandemic’s affect on markets could be waning. 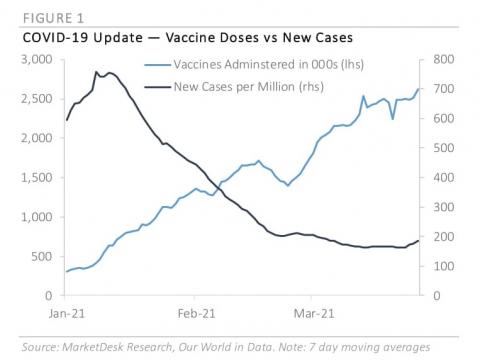 Positive progress on are allowing public officials to ease restrictions. States are removing capacity restrictions on restaurants and bars and allowing public venues to reopen. However, restriction easing comes as virus variants are emerging and new daily confirmed cases are ticking higher. The risk is new cases counts increase in the months ahead. Will there be another wave of the virus? Or will vaccinations keep another surge at bay?

The federal government and Federal Reserve both remain committed to supporting the economic recovery. In March, Congress passed the Biden administration's $1.9 trillion fiscal relief package, which distributed $1,400 checks to individuals and extended unemployment benefits. The relief comes despite improving virus trends as the Biden administration and Treasury Secretary Janet Yellen reiterate that these efforts are intended relief monies not stimulus, as the biggest risk is not acting big enough.

Looking ahead, the Biden administration is drafting a $3 trillion infrastructure and jobs package. The infrastructure portion is expected to focus on repairing the nation's roads, bridges, waterways, and rails and tackling climate change. A domestic priorities bill focused on education and childcare is expected to follow. The bills’ expensive price tags are prompting questions about funding, with the Biden administration considering corporate and individual tax increases to offset some of the spending. Certainly, corporate tax rates will be in focus – as will some of the very generous individual tax cuts instituted during the Trump administration.

And, while the Federal Reserve held interest rates and bond purchases steady in the first quarter, the central bank is walking a tightrope by maintaining its current policy. Its own internal projections point to stronger growth and higher inflation ahead. However, Chairman Jay Powell reiterated it will take time to reach the bank’s goals of maximum employment and 2% sustained inflation. He added the Fed wants to see actual progress, not forecast progress, before removing support. As a result, the Fed does not expect to raise interest rates until 2023. Time will tell – and markets are already anticipating higher rates.

The combination of positive virus progress and more fiscal and monetary stimulus drove the first quarter’s reflationary narrative. Reflation is defined as a period of price increases when the economy is striving to achieve full employment and growth. The market is betting the combination of positive vaccination momentum, fiscal stimulus, and low interest rates will supercharge 2021 economic growth.

One of the first quarter’s big stories was the Treasury yield curve’s steepening, which occurs when the yield gap between two bonds widens. Figure 2 charts the spread between the yield on the 10-year Treasury and the 2-year Treasury, or the 10-2Y spread. Markets track the 10-2Y spread for signals about future economic expectations. A steeper or widening spread signals expectations for stronger growth, higher inflation, and/or interest rate increases. A flatter or tightening spread suggests markets are concerned about the economy. Recent spread movement indicates the market is gaining confidence as the economy prepares to reopen with significant fiscal stimulus and monetary policy support. 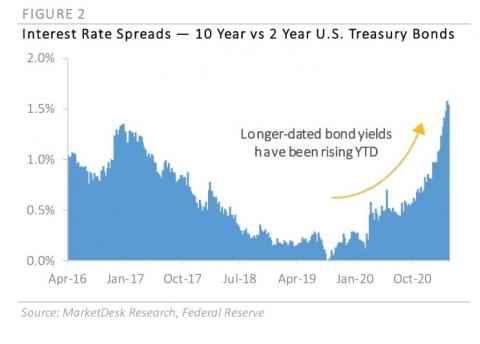 The reflationary environment impacted equity returns. Performance was volatile at times as the market rushed to buy companies and sectors that benefit from stronger economic growth. Cyclical sectors, such as Energy, Financials, Industrials, and Materials, outperformed, while defensive sectors, such as Health Care, Utilities, and Consumer Staples, underperformed. The Russell 2000 Index, which tracks small-cap domestic stocks, returned 12.9% during the first quarter, while the S&P 500 Index, which tracks large cap stocks, returned 6.3%.

The steeper 10-2Y spread also created a speed bump for growth stocks during the first quarter. The Russell 1000 Growth Index returned 0.9% during the first quarter. However, high-flying growth companies, such as Tesla, Zoom, and Snowflake, traded lower as the market questioned the group’s expensive valuations. In contrast, the Russell 1000 Value Index returned 11.3% as investors rotated into cheaper cyclical stocks. 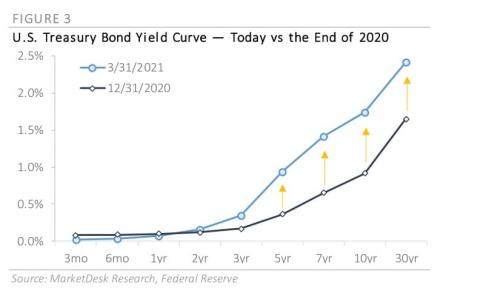 The economic outlook brightened significantly in the first quarter due to positive vaccination efforts, declining COVID case counts, and supportive fiscal and monetary policy moves. Real-time data, including TSA security screenings and OpenTable reservations, is already rebounding. The market expects the economy to strengthen further in the coming months. As an example, the Federal Reserve recently increased its 2021 GDP growth estimate to 6.5% from 4.2% in December 2020. The economy has not expanded that fast since growing 7.2% year-over-year in 1984. 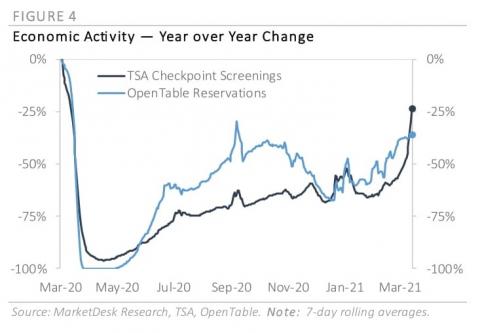 Did the Market Get Ahead of Itself?

The question remains: how much future economic growth is already priced into the stock market? February economic data was messy, and investors are questioning if cold weather or a slowing recovery is to blame. The result is an unsettled market trying to figure out what happens next. One thing is certain -- the economy has big expectations to meet in the coming months. 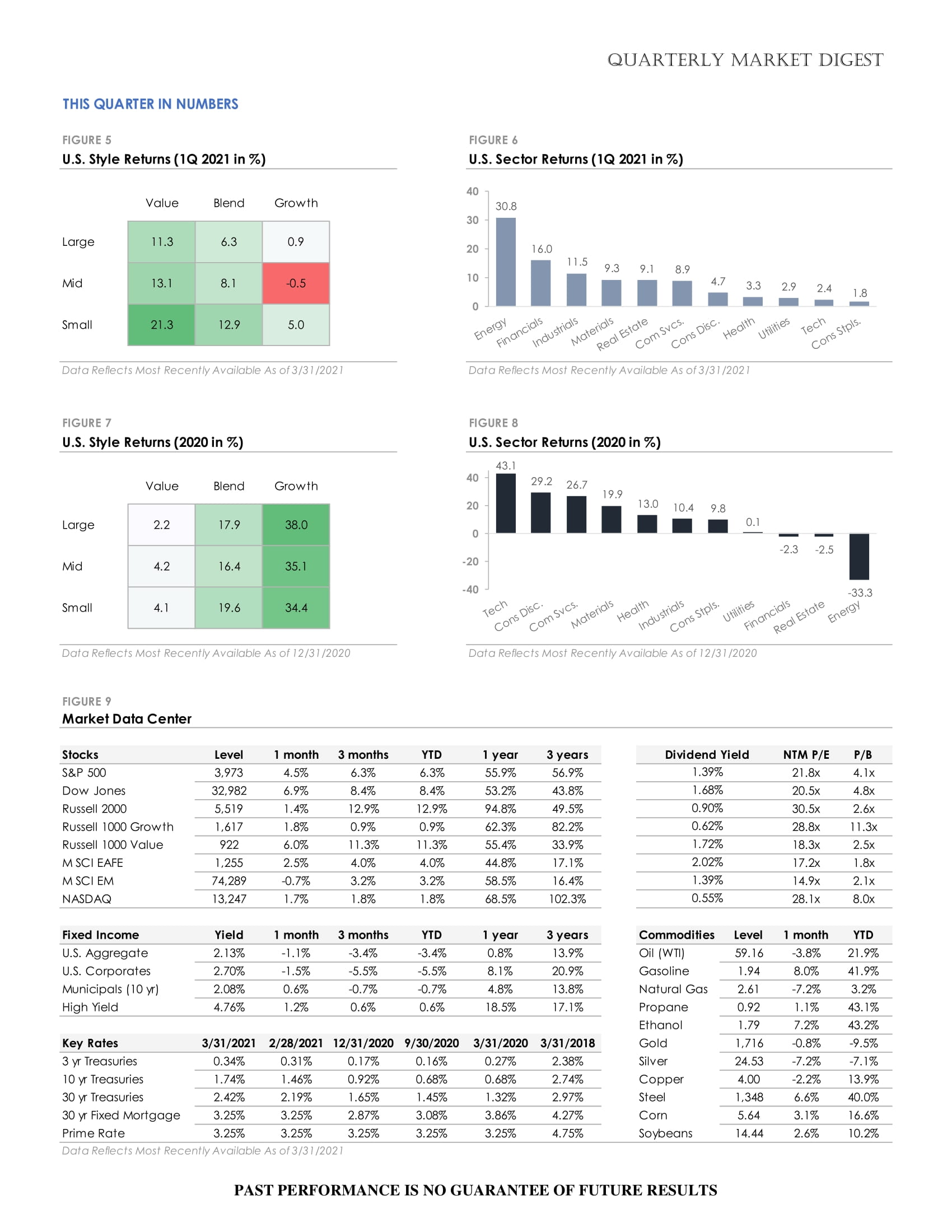 “The investor’s chief problem – and even worst enemy – is likely to be himself.” -Benjamin Graham