The reopening pace accelerated during the second quarter. Rising vaccination rates allowed more states to ease restrictions. Indoor dining capacity restrictions were lifted, and stadiums filled up as fans returned to the stands. Subway ridership rose, and the skies grew more crowded as people booked vacations. Economic data confirmed the economy’s recovery as the labor force grew and unemployment claims fell. The outlook continues to improve as life gradually returns to normal. This quarterly letter looks beyond the reopening -- at inflation headlines, interest rates, and market performance as we enter the second half of 2021.

The Federal Reserve’s June meeting created waves across the stock market. In line with investors’ expectations, the Fed said it would keep interest rates near zero and continue to buy $120 billion of U.S. Treasury bonds each month. However, the Fed’s press conference after the meeting hinted at changes to its economic projections and this surprised the market. More specifically, the Fed increased its 2021 inflation expectations and pulled forward its expected timeline for hiking interest rates. More members of the Fed’s policy-making committee now see the potential for at least one interest rate hike by the end of 2023, with some members predicting multiple interest rate hikes.

The Fed’s tone marked a significant change from prior meetings and represented the first step toward tightening monetary policy. Moving forward, the Fed has the difficult job of phasing out support for the recovery without alarming the market and stalling the economic recovery. The job will be made more difficult by an economic recovery that is both uneven and progressing at a faster pace than historical standard. Investors will be intently watching and listening to the Fed over the coming months for clues about its next steps. 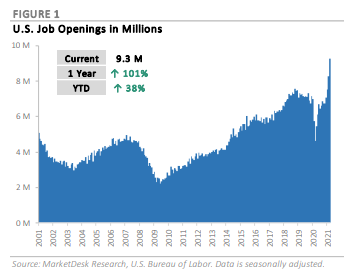 These inflationary pressures are starting to show up in consumer prices. The headline consumer price index rose +4.9% year-over-year in May 2021, which was the fastest pace since September 2008. The key question is whether current inflation pressures are transitory (i.e., temporary) or longer lasting. The Fed views inflationary pressures as transitory and points to big price drops early in the pandemic artificially making today’s inflation figures look higher. As further evidence, data indicates most of the price pressures are occurring in categories where demand is soaring as the economy reopens, such as used cars, air travel, and hotel rooms.
The Fed previously said it would let inflation run slightly above its target to make up for years of weak inflation. The Fed’s new inflation policy suggests it will wait longer to raise interest rates, which is why the market was caught off guard by the Fed’s change in tone at the June meeting. But, the risk is inflation runs too hot, forcing the Fed to raise interest rates sooner rather than later.

The market environment and investor sentiment both shifted during the second quarter. While the first quarter focused on the reopening trade and strengthening economy, the Fed’s changing outlook and rising inflationary pressures during the second quarter caused investors to question if the market was too optimistic. Investors’ appetite for riskier asset classes, such as small cap stocks and cyclical sectors, cooled at the thought of higher interest rates and rising consumer prices. 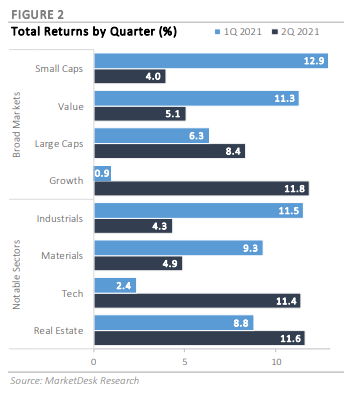 The change in equity market performance points to a recent unwinding of the reflation trade, which focused on the rebounding economy and rising prices. The timing coincided with the Fed’s June meeting. While the Fed did not actually change its policy, the change in tone was enough to cool the reflation trade.

The credit market also felt the effects of the Fed’s changing outlook and rising inflationary pressures. After long-term interest rates rose during the first quarter in anticipation of a stronger economy, investors reversed course and rates moved lower during the second quarter. The move lower was especially pronounced in long-term rates. Figure 3 shows the 10-year Treasury yield fell from 1.74% at the end of March to 1.45% at the end of June. Falling interest rates support higher bond prices, which caused longer maturity bonds to outperform during the second quarter. 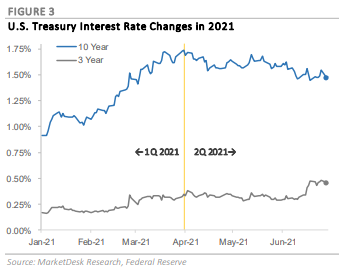 Second Half 2021 Outlook – A Confused Market

Market volatility is picking up as the second quarter comes to an end. And Wall Street opinion has never been more divided. The big question is whether investors will return to the reflation trade later this year, and asset class returns are producing mixed signals. Interest rates rise one week and fall the next as the market attempts to find a new normal. Cyclical sectors outperform one week only to underperform the next week. There is a push and pull occurring beneath the market surface as the market struggles for direction.

The unresolved questions will likely continue to weigh on the stock market in the coming months. However, this does not mean the market will necessarily trade lower. It simply means the ride could be bumpier in the months ahead. The pandemic’s unique nature and corresponding quick economic reopening are unlike recent recessions. Figure 4 shows the S&P 500 Index has returned 92% from its pandemic low point and 32% since the start of 2020. The market has already priced in a strong recovery, and the second quarter performance reversal suggests the “value” trade might have gotten ahead of itself. The next quarter should provide actionable new information about the ongoing recovery. As Fed Chairman Jay Powell has repeatedly stated, there is not a template or model for the current recovery. 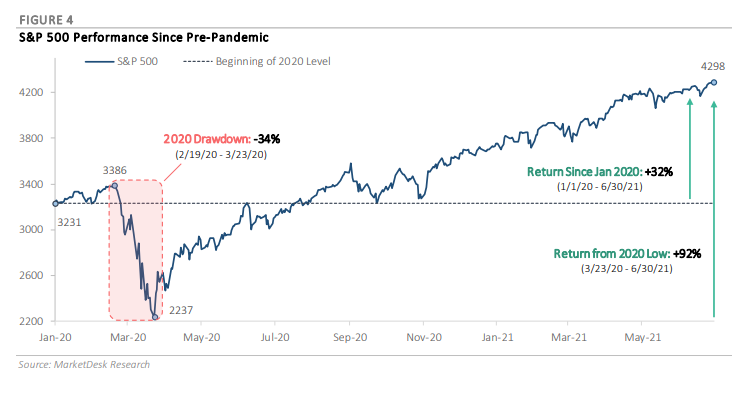 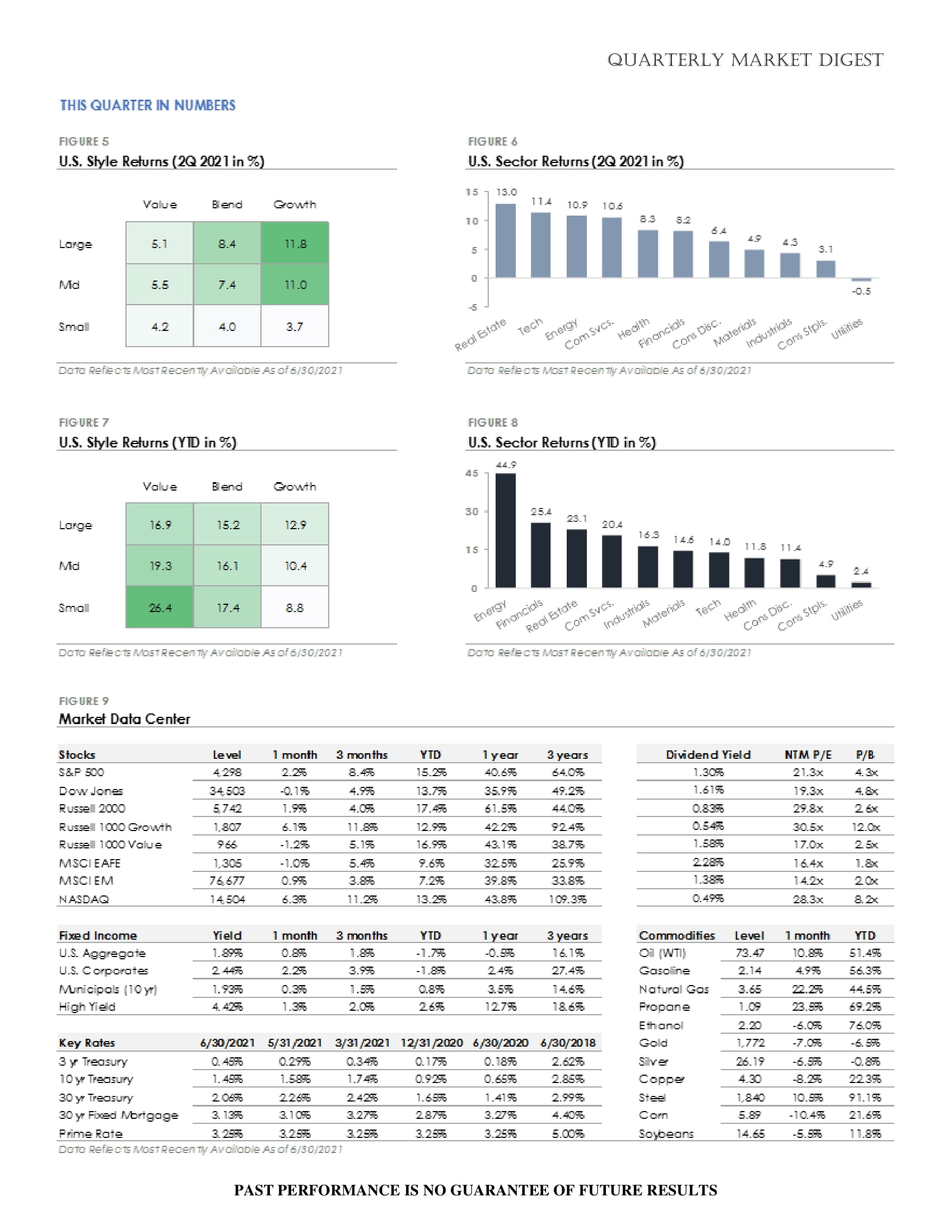 “There are two times in a man’s life when he should not speculate: when he cannot afford it, and when he can.” - Mark Twain