In the first quarter of 2022, investors were blasted by powerful economic headwinds and tossed around by geopolitical turbulence. Among headlines moving the market were: the Federal Reserve’s first interest rate increase since December 2018, Russia’s invasion of Ukraine, and stubbornly high inflation pressures. For most investors, it was a nauseating ride. This quarter’s newsletter recaps the bumpy first quarter, discusses key market themes impacting your portfolio, and looks to the future.

2022 started the same way 2021 ended, with inflation accelerating at the fastest pace in four decades. The Consumer Price Index, which measures inflation, rose +7.9% year-over-year during February 2022. It was the fastest pace since January 1982 and an increase from 2021’s +7.1% annual pace. Inflation pressures remained broad with the price of food, vehicles, and rent all increasing significantly over the past 12 months.

Increasing geopolitical tensions in eastern Europe could intensify inflation pressures after Russia invaded Ukraine during February. Russia is a significant exporter of various commodities, including energy, aluminum, and wheat, and Russian sanctions raise the risk of supply shortages and higher prices for key commodities. WTI crude oil traded as high as $130 per barrel in early March, which was the highest level since 2008, while aluminum and wheat prices both reached record highs. The Bloomberg Commodity Index, which tracks a broad basket of energy, agriculture, and metal prices, is up ~27% year-to-date.

Data released during the first quarter indicates consumers are starting to feel the effect of higher gas prices at the pump and food prices in the grocery store. Figure 1 shows the University of Michigan’s consumer sentiment index dropped below 60 in March. Why is this significant? The chart shows the latest consumer sentiment reading is extremely negative compared to history. Prior readings under 60 occurred around high inflation in 1980, the 2008 financial crisis, and the 2011 U.S. credit rating downgrade. Sentiment is not typically this weak when the labor market is strong, and the S&P 500 is only ~5% below its record closing high. 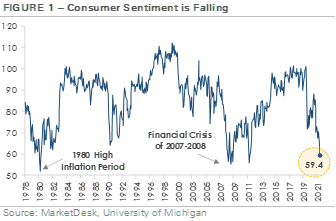 Soaring inflation forced the Federal Reserve to raise interest rates for the first time since December 2018. The market widely anticipated the increase and was already moving rapidly to price in aggressive Federal Reserve tightening. Figure 2 graphs the absolute percentage change across key U.S. Treasury yields during the first quarter. It shows yields rose across the Treasury curve as markets prepared for more restrictive monetary policy and higher interest rates. 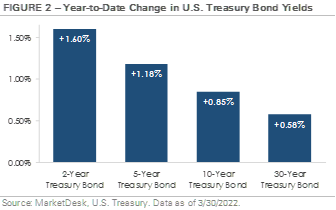 The Treasury yield movements provide a clue about the market’s forward expectations. Figure 3 shows the spread between long-term yields, such as the 30-year Treasury, and short-term yields, such as the 5-year Treasury, collapsed during the first quarter. Why did the spread tighten to near 0%? The short-end of the Treasury yield curve is more sensitive to Federal Reserve policy, while the long-end of the yield curve is more sensitive to economic conditions and the future outlook. The sharp move higher in short-term Treasury yields indicates the market expects the Federal Reserve to continue raising interest rates throughout 2022.

Why does the yield spread between bonds with two different maturities matter? Markets use the spread between long-term and short-term borrowing rates, such as those on the 30-year and 5-year Treasury bonds, as an indication of investors’ assessment of the prospects for economic growth and inflation. What does a tighter spread signal? A tighter spread suggests investors are less positive on the forward outlook and therefore willing to accept a lower rate of return to lend for a longer period of time. In contrast, a wider spread indicates investors are more positive on the outlook and therefore require a higher yield to compensate them for the opportunity cost of lending money for a longer time period. Based on the current 0.03% spread, investors appear to be concerned about the U.S. economic outlook.

Data released during the first quarter indicates the U.S. economy is softening. Figure 4 tracks three key consumer indicators. The top chart tracks retail sales, excluding the volatile auto and gas station categories. While retail sales remain firmly above the pre-pandemic trend, the chart shows the month-over-month growth rate turned slightly negative during February. The middle chart shows new home sales declined for two consecutive months to start 2022. The declines occurred as the 30-year fixed rate mortgage jumped to 4.89% at the end of March 2022 from 3.27% at the end of 2021 and housing prices continued to rise.

The bottom chart examines the personal savings rate as a percentage of disposable income. It shows the savings rate increased significantly during the Covid pandemic as spending on services declined, unemployment insurance increased, and individuals received multiple stimulus payments. However, the savings rate steadily declined over the past 12 months as inflation rose, unemployment insurance ended, and consumers returned to their pre-pandemic services spending. January’s 6.1% personal savings rate was the lowest since December 2013. 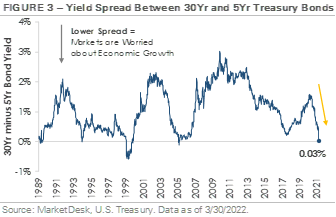 Why do we reference consumer sentiment and the three consumer-related indicators? The consumer accounts for ~70% of U.S. economic growth. Economic growth could slow if consumer spending starts to slow. For now, the trends do not point to a dramatic slowdown, but they do suggest the U.S. economy and consumer are softening. 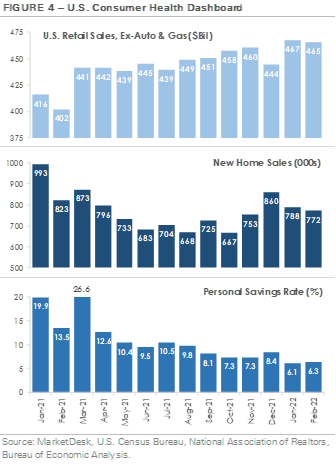 While the -4.6% return may seem shallow, it hides the S&P 500’s roller coaster ride during the first quarter. U.S. stocks experienced significant selling pressure during January with the S&P 500 suffering its biggest monthly selloff since March 2020. The selling pressure continued into February, and by early-March, the S&P 500 was down -12.5% since the end of 2021. However, performance turned around during the second half of March with the S&P 500 registering a ~9% return. Following the rally, the S&P 500 ended the first quarter only -5% below its early January all-time record close.

There was a notable performance divergence between growth and value stocks during the first quarter. Russell 1000 Growth returned -9%, underperforming the Russell 1000 Value’s -0.7% return. As a reminder, growth stocks are valued based on their future earnings, and rising interest rates, such as Figure 2’s year-to-date increase, tend to decrease the valuation multiple markets place on those earnings. Within the S&P 500, Energy was the top performing sector, returning +39% as oil prices soared +30%. On the opposite end of the spectrum, Communication Services, Consumer Discretionary, and Technology were the three worst performing sectors due to their large Growth-factor exposures.

The speed and size of the rise in Treasury yields caused bonds to underperform equities during the first quarter. Corporate investment grade bonds produced a -8.4% total return, underperforming corporate high yield bonds’ -4.7% total return. Why are these returns notable? Bonds have two primary risks: (1) interest rate risk, which is the risk interest rates rise and the bond’s price declines, and (2) credit risk, which is the risk a borrower defaults on the loan. In general, investment grade bonds have more interest rate risk, because investors lend mo        ney for a longer period of time. In contrast, high yield bonds have more credit risk. Year-to-date bond returns indicate investors are more concerned about interest rate risk rather than credit risk. This may reverse later in 2022 if economic growth slows and interest rates stabilize.

Our outlook calls for current market themes to last throughout most of 2022. The Federal Reserve expects inflation pressures to ease as the year progresses, but there is a risk inflation remains elevated longer than forecasted due to rising energy prices.

Given the magnitude of current inflation pressures and the risk of persistent inflation, the market is “pricing in” more interest rate increases during 2022. The Federal Reserve’s next meeting is May 3-4, and market mavens widely expect the central bank to raise interest rates for a second consecutive meeting. However, there could be one significant difference ― multiple Federal Reserve governors recently highlighted the possibility of raising interest rates by 0.50%, double the 0.25% increase seen at the March meeting, to ease inflation. While the difference may seem small, the market impact could be significant as trillions of dollars of assets react to the change.

There are many moving parts to pay attention to in the coming months. We will be monitoring economic data releases, corporate earnings, and geopolitical issues in eastern Europe for clues about the market’s next move. This year’s U.S. midterm elections will also bring market uncertainty as campaign season swings into gear over the coming months.

A Look Toward the Future: Onward and Upward

After a turbulent start to 2022, we remain confident that global markets will find smoother air – and ultimately chart a path to higher altitudes. We are optimistic about the future as new, disruptive technologies, innovations in healthcare and medicine, the digitization of currency, autonomous vehicles, renewable energy, virtual and augmented reality, etc., will continue to change the way we live, learn, socialize, communicate, work and play.

We encourage investors to stay calm and be patient. Turn off the TV every now and then and look toward the future. In these moments of chaos, there are opportunities for those willing to look beyond the headlines. We are living in a gilded age of unprecedented innovation and fantastic change. And this is an exciting time to be alive and an opportune time to be an investor. 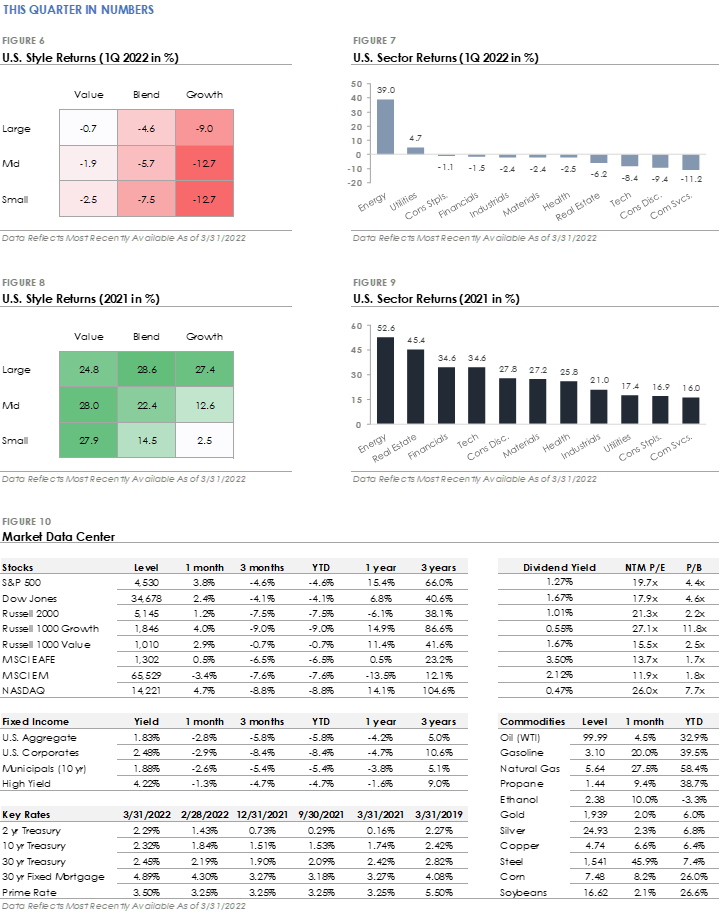 "In investing, what is comfortable is rarely profitable."